Is There Lead in Your New England Drinking Water?

New England is comprised of a group of states with a high prevalence of potentially corrosive groundwater, according to a study by the U.S. Geological Survey.

Lead in water has become a more well known issue in the news since the Flint, Michigan disaster in 2014. But what happened only highlighted an issue that could be widespread, particularly in areas such as New England where older homes with older pipe fixtures are more common.

In Connecticut, there are no regulations on well water users, as they are expected to take care of their own water source. Lack of education could leave homeowners susceptible to lead and other odorless, tasteless contaminants that are harmful – particularly to children.

Recent issues that have come to light have caused legislatures to take action, not only for more stringent laws for residential but also public institutions such as schools.

According to the report the new law:

Other cities in New England, such has Providence, have been fighting against decades-old infrastructure. With limited public dollars to commit, it can be an uphill battle in cities that are strapped for funding.

How Can I Detect Lead In My Home?

There are steps you can take in determining if your home uses lead pipes:

If you have a basement, your service line is likely accessible from there – usually near the front of the home. If you don’t have a basement, a typical spot would be in your house, more than likely in a corner, nearest to the road and low to the floor. 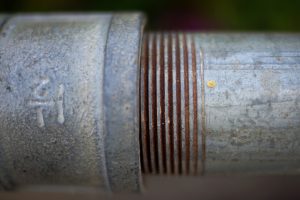 Scrape the pipe with a key or screwdriver. One of the primary indicators that your pipe is lead is a dark matte gray color, and the metal turning soft and shiny after scratching it. A bronze color would reveal your line is copper. Likewise, try a magnet on your pipe. If it sticks, your line probably galvanized steel.

Just because your line is not lead does not mean you’re out of the woods. Rusty pipes can collect small pieces of metal and sometimes will release these pieces of lead, even after the lead plumbing has been removed. You may also have lead fittings or solder connecting your pipes.

Make sure to flush your water for 30 seconds each time before use. Consider purchasing or reverse osmosis system for your tap water.

Contact your local New England water provider or a local plumber for an educated opinion on possibly replacing your private service line.

To find out more about receiving a free in-home water test from your local New England Culligan® dealer, call (833) 586-4878 or connect with us on the web.